Health and medical news from Tristan da Cunha and its Camogli Hospital. 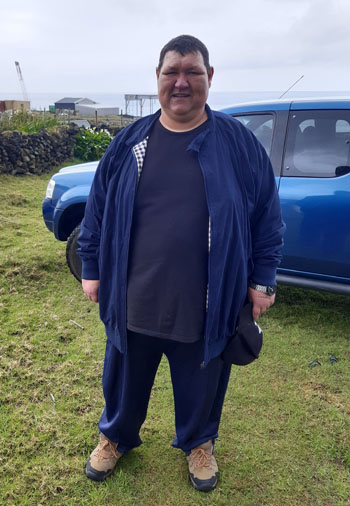 Jonathan Repetto is a cheerful and talented young man who very much loved by the community of Tristan da Cunha. For many years he has struggled with his body weight which was affecting his health and his quality of life.

In March 2020 Jonathan was very sick with lung and heart problems requiring oxygen and a special breathing machine for use at night, due to the high chance that he could stop breathing. Although he became a bit better, his life was not the same, he was only able to walk short distances and it was difficult to work or even do his normal routine.

Jonathan understood that losing weight was the only choice to sustain his life. He received enormous support from the Healthcare Team as well as from his family and friends, but only his strong will power could achieve his goal.

On Friday 25th of September 2020, Jonathan had a serious heart attack and he was promptly brought to the Hospital where he "arrested". The health team at Camogli Hospital worked for hours on him, performing cardio-pulmonary resuscitation. Miraculously, Jonathan came back. He woke up with his big smile and his usual jokes, praising the Lord and thanking others for his return.

Outside the emergency room, his family and friends cried with delight to hear the great news. It was a very special moment for those that could witness such an emotional scene. Jonathan has since travelled to Cape Town on the SA Agulhas II to see the specialist cardiologist there.

Jonathan is a new man; he is looking fantastic. He has lost 45 kg (in 6 months) and everybody can notice it!

Jonathan is a hero to us - a man with a will of steel, who can conquer any challenge and recover his own heath by changing his lifestyle. We are so proud of him!

Medical Emergency on the MFV Edinburgh

While the MFV Edinburgh was waiting off-shore for a break in the weather so that we could finish off-loading, we got a radio message from the vessel on Friday 17 July 2020 saying that a crew member had been taken ill. We immediately launched a RIB to collect him and bring him ashore to the hospital, where he was examined. The doctors here confirmed that he had suffered a serious myocardial infarction (i.e. a heart attack). 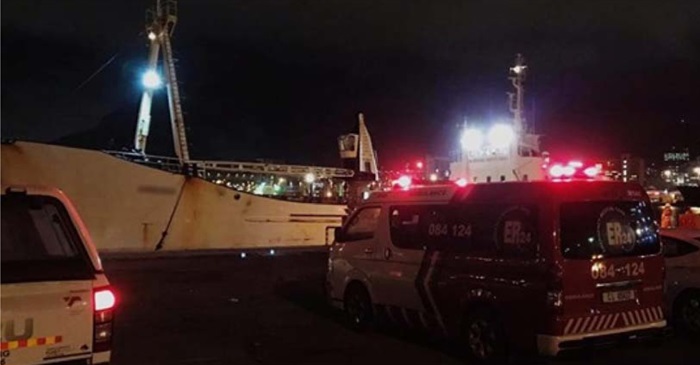 An emergency ambulance collects the medical evacuee from the MFV Edinburgh in Cape Town harbour.

Following consultations with cardiologists in Cape Town, the medical opinion was that he needed an operation, and that it would be better if he returned to Cape Town on the boat, rather than waiting another two months here on the island for the next boat. However he would need some medical attention on the voyage. So we brought ashore two members of the ship's crew who had some medical training, and explained to them what treatment was required, before they all returned to the Edinburgh on 19 July. We also lent the boat one of our oxygen concentrators to assist him on the voyage, and gave him all the necessary medication.

The ship set off again on 19 July, arriving in Cape Town on 25 July. The crew of the vessel kept in daily contact with the doctors on Tristan and the cardiologists in Cape Town.

We are delighted that he made it back to Cape Town, and that he has been admitted to hospital. We wish him a speedy recovery.

The rescue boat only managed to get out of the harbour thanks to the expertise and knowledge of the Tristanian crew. It was a really a tricky job, as they had to time the waves perfectly in order to get out and back into the harbour. The rollers coming into the harbour were monstruous and made it look like a washing machine! It was amazing to watch them, and for me the men were very very brave to do the job. But they did it, and the whole process didn't even take ten minutes!

Initially, we were guided by a cardiologist from Port Elizabeth who advised us to take the critical decision to start thrombolysis and the initial treatment. Later we managed to get hold of our regular cardiologist adviser in Cape Town. On arrival in Cape Town, the patient was admitted and treated at Vincent Palloti Hospital. The cardiologists there did a stunning job and all went well. His discharge from the hospital is planned for this week.

It is only thanks to the dedication of so many people, here on the island, on the ship and in Cape town that the patient made it. Very kindly, also we have received today a lovely thank you message from his wife in Ukraine. Her email has been passed on to all the people involved.